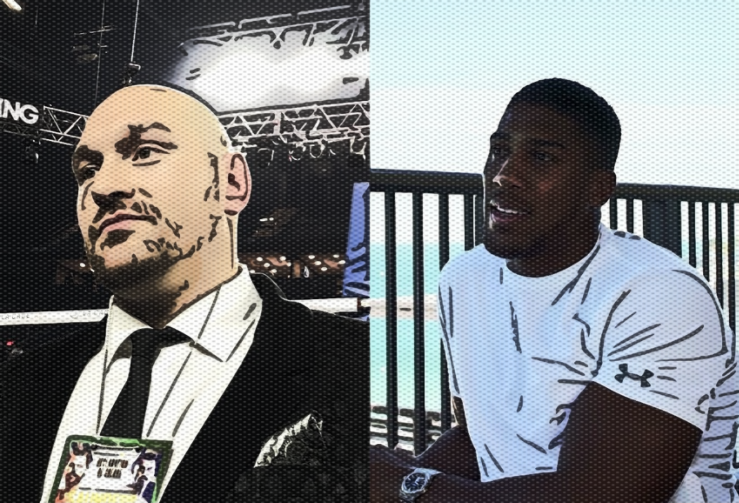 Let me start by saying this; virtually any heavyweight can beat any other heavyweight on any given day. Heavyweights get the big money and the lion’s share of boxing enthusiasts’ attention for one reason, and one reason only – the knockout. Knockouts are “sexy.” It is the unique and equalizing factor in the division and it’s why fans will be glued to their seats to watch what, on paper, would appear to be the greatest of mismatches. Any professional boxer over 210 lbs. or so can knock cold, any other heavyweight if he catches him “just so.” Ask Joshua himself. He fell victim to a 7th round knockout at the hands of Andy Ruiz Jr. The sport is rife with examples like this. Here are some of the more famous; Muhammad Ali over Sonny Liston; Rd 1, Michael Bent over Tommy Morrison; Rd. 1, Corrie Sanders over Wladimir Klitschko; Rd 2, and maybe the biggest of them all, Buster Douglas over Mike Tyson; Rd. 10. So, let’s not think that Anthony Joshua has no chance against Tyson Fury; he does.

But there are many other reasons as well. Joshua finds himself as a fairly big underdog against Fury; some reasons are valid, but many are not. Here’s my analysis:

Chin: Let me start with the biggest misconception of all about Joshua. I’ve heard this and read this countless times; “Joshua has a questionable chin.” To this I say, “what?” I’m not sure how a guy with a record of 23-1 (21 KO’s) can be having his beard questioned to the extent that Joshua’s has been. The man has been stopped once; by the aforementioned Ruiz. Once! Yes, he’s been knocked down by the likes of David Price, Wladimir Klitschko, and Joseph Parker; but so what? He got up each and every time and won those fights. Muhammad Ali, often credited with the greatest chin in boxing’s storied history was knocked down by 4 men, Sonny Banks, Henry Cooper, Joe Frazier, and (questionably) Chuck Wepner. Other heavyweight champions have been knocked down as well, many of them; Joe Frazier, Joe Louis, James J. Braddock, Lennox Lewis…the list goes on. None of them have had their chins questioned nearly as much as Joshua’s has been. I think we need to put this idea about Anthony to bed, once and for all. His chin is fine.

Power: Next up, but closely tied to the above, is the fact that Tyson Fury, while a decent puncher, isn’t a devastating one by any means. Fury has 21 knockouts in his 30 wins – decent, but not overwhelming. Joshua won’t be facing a George Foreman or an Earnie Shavers. Fury is a very tall (6’ 9”), very awkward boxer. He has good skills and surprisingly fast hands. His footwork is better than average and his ring generalship is good. He also has a very high boxing I.Q. In fact, I would argue that in this, we find his greatest advantage over Joshua. I think Fury is a better thinker, and more adaptable than is Joshua. But this idea that Fury is going to blow away Joshua, is unlikely – not impossible – but unlikely.

Athleticism: The fight reminds a little of Norton/Ali I. Oh relax, I can hear pundits already screaming at me that I’m crazy. But hear me out. No, I’m in no way equating the skill level of Fury and Joshua to that of Ali (classic boxer) and Norton (all-rounder), but I do see this parallel; a boxer (Fury) versus an all-round athlete (Joshua). I think that while Fury is the better technician and has an edge tactically, Joshua brings more of an overall game to the ring. I mean, just look at him! The man is a ridiculous specimen. He has muscles in places most of us don’t have the places. His hand/eye co-ordination is extraordinary. His footwork, although not technically perfect, is light and quick. He is an extremely gifted natural athlete and I think this is very much to his advantage over Fury.

Height: Another reason I believe Joshua can beat Fury is his height. While Fury is exceptionally tall, Joshua isn’t exactly a little guy, either. He’s 3 inches shorter at 6’ 6” ; a tall man by any reasonable standard. Yet, I think the 3” deficit in height is to Joshua’s advantage. Joshua’s reach and hand speed are enough for him to reach Fury with his jab while garnering some protection from the height deficit in helping him stay under many of Fury’s own jabs. I am particularly aware of the straightness of Fury’s jab – a trainer’s dream; but in this case, it may actually hurt him in that his very straight shot will be just off target all night. Yes, he can “punch down” and he’s accustomed to doing so – but not against the likes of Joshua, who has the power to really make you pay for misses.

Experience and pedigree: Joshua, as a former Olympic gold medalist, has an impressive amateur background from which to draw. I would also argue that Joshua has faced the better opposition. While Fury has beaten Derek Chisora twice (1 decision, 1 RTD), an old Wladimir Klitschko (decision), and the highly overrated Deontay Wilder (1 draw, 1 TKO win), Joshua has beaten Dillian Whyte (TKO), Klitschko (TKO), Dominic Breazeale (TKO), Charles Martin (KO), Alexander Povetkin (TKO) and Carlos Takam (TKO). Not only has he faced the better opposition, he has beaten them far more convincingly than has Fury. Again, remember that Joshua has a knockout percentage of 91%; Fury? 70%. Advantage Joshua!

Fitness: Then we have the conditioning issue. Joshua has a decided advantage over Fury on this count. Joshua has entered the ring for each of his 24 professional bouts as one would hope a pro would do; in peak physical condition; no “getting tired on his way to the ring because of the weight of his costume”, or any such nonsense. Joshua will look like an athletic Greek statue come to life, as he enters the ring to do battle with Fury. Fury has a different history. He has fought at weights from 240 lbs. to approaching 300 lbs. Even when in his best condition, Fury looks to be a bit soft around the middle and never strikes any impartial observer as appearing to be in the type of shape one would expect of the heavyweight boxing champion of the world. Again, advantage, Joshua!

Miles on the clock: Big advantage for Joshua here. He has fought fewer rounds and has absorbed much less punishment over his career than has Fury. The age difference is only 1 year, so shouldn’t be a factor. But Fury clearly looks a lot more “shop-worn” than Joshua. Fury fights “old” at times. While Fury throws, on average, 10 punches per round more than Joshua, he is far, far less accurate. His straight right, especially as he tires, takes on a bit of a weird, “loopy” look. Fury’s overall average accuracy is about 29% while Joshua is around 43% according to CompuBox. Joshua appears to be about a decade younger rather than just the one year that he is. By the 8th round or so, it becomes clear that Fury is the “older” guy by quite a bit.

Intangibles: This brings me to the big one; the “hidden factors” that can influence how a fight turns out. For reasons which I cannot grasp, the scuttlebutt is that the judges and fans are more likely to be on Fury’s side. I don’t know why people feel this way, but I certainly do not. Yet, I do believe that the intangibles favor Fury, and here’s why. No matter how you slice it or dice it, there was an odor to Joshua’s loss to Ruiz. At no point did he appear to get hit that hard but he sure tasted the canvas a lot! Yes, he redeemed himself somewhat by winning a unanimous decision over a very out of shape Ruiz in their re-match, but there are still questions about exactly what happened to Anthony in their first fight. Bad day at the office? Or something worse? The jury is out and Joshua needs a spectacular win over Fury to put those doubts to bed – as much for himself, as for us. As his luck turns out, he will have the opportunity to do so.

Anthony Joshua is a fighter with something to prove. He was the heavyweight darling until his very unexpected loss to Andy Ruiz. Nobody saw that coming; especially not Joshua. Now, he will have the chance to redeem himself on the world stage. Will he do it? I’m not certain. Can he? Definitely. We’ll get to see in 2021. (assuming Anthony gets by Kubrat Pulev – shouldn’t be a problem). Should be a barnburner!