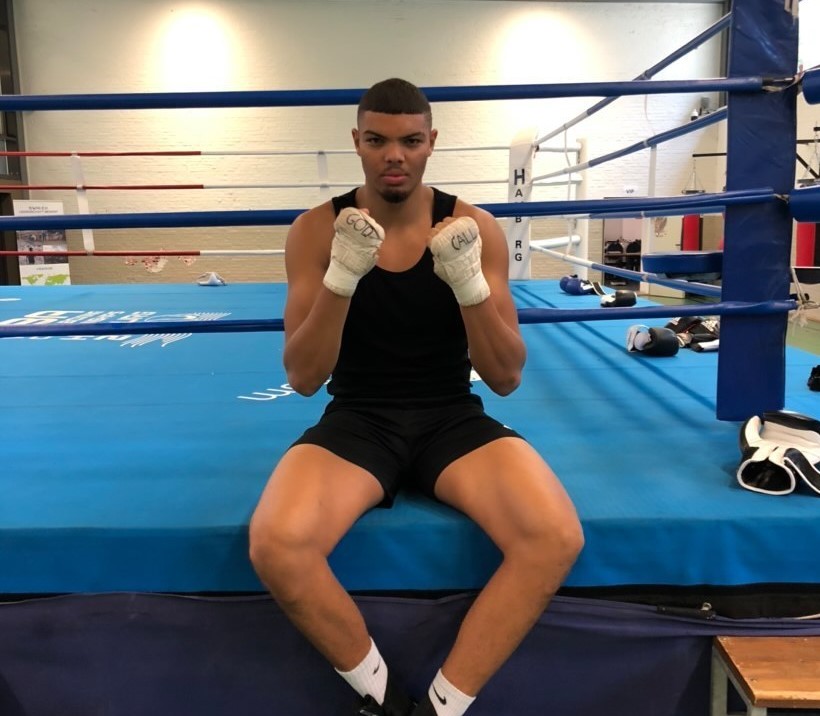 Do you ever wonder who’s sparring with the best heavyweight boxers in the world? Who they call to prepare for their title bouts? Well, let me introduce you to one very special boxer: Emanuel Odiase! The youngest of four brothers, Emanuel was born and raised in a small town in south west Germany called Heidelberg. His mother comes from Germany and father from Nigeria. That’s why it is no surprise Emanuel’s favorite dish, is the traditional Nigerian jollof rice with chicken and plantains. It is true: he trains hard and he is very competitive, but his life is not all about boxing. Emanuel also loves to play tennis or beach volleyball and travel to warm places with nice beaches. He admits that he hasn’t seen a lot of the world and there are still nice places to visit, but he has already sparred with some of the best boxers in the world. We had the opportunity to recently speak to him! Dive in!

Jabtojab: Hi Emanuel! Thanks for your time… so, how did boxing enter your life?

Emanuel Odiase: Hi Pedro! My pleasure… I was introduced to boxing by my oldest brother Dominique who brought me into his gym when I was 16 years old. I used to play football during my whole childhood.

Lots of boxers go trough that transition. Who’s the boxer that inspired you the most and why? Muhammad Ali was my biggest inspiration. Not just because of his fighting style but mostly because of the things he’s done outside of the sport. He changed people’s mindset and was an inspiration for a lot of people. I strive to become a wise man and boxer like him, and one day change the world. 🌍

I agree! He is truly a big inspiration. How was the experience the first time you sparred with somebody? My first time sparring was almost like a street fight. It was my first day in the boxing gym and I had no technique but I had a good scrap.😄👊🏾

I can imagine that (laughs).. Why is sparring so important to get ready for a competition? Sparring is very important before a fight because you go through the motions and it gets your timing and sense of distance, which are the most important in fighting, on point.

Interesting! While sparring, who were the boxers that you learned the most from? The boxer I learned the most from I would say is Anthony Joshua. Not even boxingwise but just the way he handles all the fame and the attention from the world. He’s a very humble champion, he loves the sport of boxing and he’s dedicated his life to it.

I agree. We are big fans of him here in France. And about competition: What are your plans? When will we see you go pro? I plan to go pro this year but it’s still up in the clouds so I can’t really give you guys a date yet. I’d love to be back in the ring soon cause for me it’s just all about getting that fighting experience.

We can’t wait to see you compete! What about trash talk? Do you think it is important for the mind games? Does it actually impact your opponent before the fight or is it just for the fans and the build-up of contest? Trash talking is a part of the game, and I think it just depends on the opponent you‘re facing. There are guys that look very strong but mentally are not that strong, so if you talk trash to them it might be an advantage to you. But there are also guys that don’t get bothered by trash talking so it just depends on who you are facing. For example Tyson Fury vs Wladimir Klitschko, the first fight. If the fight happens with no build up & no mind games, I think Klitschko beats Fury 9 times out of 10.

We don’t play boxing. So for all the YouTubers or social media celebrities: you’D better come prepared cause this sport ain’t no joke. People get hurt.

Interesting point of view… The new exhibition fights that are happening with professional boxers fighting non-professionals. What are your thoughts about that? About the new exhibition fights happening, I really can just say a few words. We don’t play boxing. So for all the YouTubers or social media celebrities: you’d better come prepared cause this sport ain’t no joke. People get hurt. I wouldn’t tell anyone to go and have a boxing fight just to earn some money or cause they like Adrenalin. If you’re not serious about the sport, don’t do it. I respect the sport of boxing way too much to support such kind of stuff. Otherwise it brings a lot of attention and new people to the sport, so it’s really not all negative. As long as no one gets hurt or seriously injured, it’s all good.