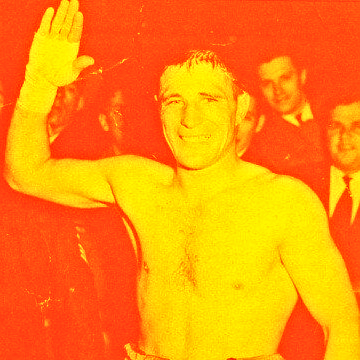 Ordinarily, you don’t want your career to be defined by a loss. Doesn’t matter what you do for a living; no-one wants their legacy to be “that time they lost” to so-and-so. That is, unless you’re the “Fighting Fisherman”, New Brunswick’s Yvon Durelle.

Yvon Durelle was a steady, if not spectacular, boxer whose 115-fight career spanned from 1948 to 1964. He closed out his time in the ring with a record of 88-24-2-1 (49 KO’s); not bad at all, but not upper echelon stuff either. He fought from Middleweight to Heavyweight; enjoying his greatest success as a Light-Heavy. He wasn’t quite a journeyman, but was also never seen as a serious threat to anyone’s world title. I suppose one could say that he was one of the original “fringe contenders.”

That all changed February 15th, 1954, when Durelle went to Brooklyn, New York to fight the up-and-coming, Golden Gloves champion, and future World Heavyweight Champion, Floyd Patterson. Although he lost a unanimous 8-round decision, Yvon acquitted himself so well that some fight fans and promoters took notice. Durelle began to get some better fights against more accomplished opponents and developed a huge fan following in his native Canada.

Again, he was no “world-beater” and for a time, he was losing almost as many as he was winning. He would go 8 – 5 in his next 13 fights until landing a re-match with Patterson. This time Durelle was less effective and he retired from the fight in the 5th round. At this point in time, Durelle was campaigning between the Heavyweight and Light-Heavyweight divisions, but he truly didn’t have any business fighting the big boys and his results were showing it. He was, after all, a converted Middleweight.

Durelle’s rough patch continued for several more fights, including a loss to perennial contender, Yolande Pompey, of Trinidad & Tobago. But after a points loss to Arthur Howard of the U.K., things seemed to turn around a bit for Yvon. He went on a 21-2-1 streak over his next 24 bouts, including a TKO win of the highly respected American, Clarence Hinnant in 1958. By this time, long-reigning champ and all time great, Archie Moore, was looking for a payday against a credible opponent. Durelle fit the bill and on a cold evening in Montreal, Canada, December 10, 1958, the Canadian found himself across the ring, challenging Archie Moore for the Light-Heavyweight Championship of the world.

Durelle wasn’t given much of a shot, to say the least. He came into the fight as a 4-1 underdog. The various pundits thought he was too slow afoot and of hand, and that as he had no one overwhelming weapon, Moore had pretty much nothing to worry about; “easy payday” they said. Well, apparently nobody told Yvon this or he forgot to read the script or something, because once that bell sounded, Durelle descended on Moore like a howling Banshee. He landed everything he threw – and he threw everything. Moore would later say that he thought Durelle and the referee were attacking him at the same time and that he felt like he had been hit by the ring stool at one point. Archie was down three times in that first stanza and shocked fans were convinced that the crown was, quite unexpectedly, about to change hands. Had they been fighting in today’s “fighter safety first” times, it would have changed hands as the referee would have been forced to call it after that third knockdown. Rather than try to describe that first round for you any further, here it is. It’s almost as exciting as Round 1 from Hearns/Hagler.

But Moore wasn’t known as “The Old Mongoose” for nothing. While his career was drawing to a close, the old man still had something left in the tank. Durelle was Moore’s 205th opponent in his astonishing 219-fight career. (Would also be his 207th when they met for the re-match.) But the thing about Moore that was so remarkable was that he never really appeared “shop-worn” until the second to last fight of his career against Muhammad Ali. Archie dug deep and summoned up everything he had learned, to survive the next few rounds. His legs were shaky but his head had cleared enough for him to think about how to survive this determined Acadian fisherman.

Durelle, for his part, lacked the skill and know-how to deal with the wily Moore. He kept trying for the big finish but Moore was too slick, too savvy, for the over-eager Canadian. In round 5, Durelle had his last hurrah, catching Moore with a crushing right to the jaw on the heels of a vicious body shot. Shockingly, Moore rose at the count of only “6!” As if to rub salt even more deeply into the wound, Moore eschewed his ring stool after that 5th round and just stood in his corner nonchalantly looking over at Durelle in his.  One can well imagine what Durelle must have been thinking too. He had hit this man with everything he had, knocked him down four times, hit him with shots that had stopped everyone else he had caught like that, yet here was Moore, still standing – and even more surprising – still fighting.

By the seventh round, it became clear that things had started to shift. While Durelle was still landing effective enough punches, Moore had recovered enough that he had begun landing like punches on Yvon. Towards the end of the round, Moore landed several flush right hands and scored his first knockdown towards the end of the round. The 8th was more of the same. The stubborn Durelle kept coming forward but Archie was timing him now and landing counter shots at will.

By the 9th round it was obvious to all that the momentum had shifted. But, Durelle was as strong a man as they came and while his stamina wasn’t that of Archie’s, his will was. Durelle landed 5 big right hands and appeared to have Moore in trouble again. But Moore was Moore. The Mongoose dug around in his bag of tricks again and once more found a way to survive what would be the brave Canadian’s last major onslaught. Moore fought off Durelle and again seized control in latter half of the round.

Yvon’s lack of fundamentals began to show and Moore started teeing off on the Frenchman. Moore kept turning up the pressure and in the 10th round Moore opened up his full arsenal, landing everything he threw. Durelle fell to the canvas again near the end of the 10th and was only just able to beat the count – in time to hear the bell. Durelle came out for Round 11 but one look at him told even the most partial fan the story, this one was over bar the crying. Moore decked Durelle with a series of counter shots from his now wildly swinging Canadian foe. Durelle got to his feet bravely but another left, right combination from Moore knocked him down and finally out. At 48 seconds of the 11th round, former heavyweight champion of the world and now-referee Jack Sharkey, formally brought the proceedings to an end when he reached the count of 10. Many years after the fight, Archie Moore would say that in his entire 219 fight career, Yvon Durelle was his toughest and strongest opponent – high praise coming from one of the true greats!

Durelle continued to toil away. He had a re-match with Moore some 8 months later but this time was stopped in only the third round. He would win the majority of his remaining fights (although he would be stopped by the up-and-coming George Chuvalo in 1959.) Yvon Durelle would have his last professional boxing match in 1964, losing a points decision to Jean-Claude Roy. He branched into wrestling and bar ownership on his retirement and found himself back in the news in the 70’s for a most unfortunate reason. Durelle shot and killed a man who attacked him at his bar. He was charged with murder and ended up being defended by a young lawyer named Frank McKenna, who would go on to become the Premier of New Brunswick many years later. Durelle was acquitted but friends and family said that he was never the same again. He opened a small museum attached to his home where he displayed his boxing memorabilia and where he would greet fans who dropped in on him for the rest of his life. Yvon Durelle passed away from a stroke on January 6, 2007; a folk-hero in his native New Brunswick and Canada as a whole. To this day, he is remembered as much for being a gentle, decent man as he is for his fight against Archie Moore. Yvon Durelle; the stuff of legends!