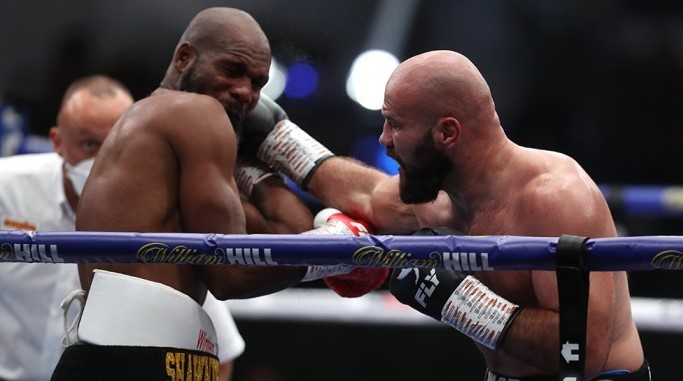 4 Wins, 0 Draw, 0 Loss! Last Saturday, boxing fans from all over the world gathered behind their screens to see the much anticipated Fight Camp of last weekend. The event promised drama and the fighters delivered it! A luxury fight card that featured high class athletes like Chris Kongo, Luther Clay, Katie Taylor, Delfine Persoon, Dillian Whyte, Alexander Povetkin, Jack Cullen, Zak Chelli, Shawndell Winters and of course the most important Croatian heavyweight boxer of the moment Alen Babić! We were fortunate enough to have a couple of minutes of his attention to gain some insights about his impressive second round victory over the American Shawdell Winters.

JabtoJab: How was the build up from the week when you arrived to Fight Camp? The feeling of being part of this event? Are you happy with the organization?

Alen Babić: It was something different. Because we all kind of gathered in the same place. Usually we are separated from the other fighters in the card. But this time everything was the same for every fight, first to last fight same crew, same things… So it was an unreal experience and I will remember it for the rest of my life.

A ring is not the right place to make me angry

Shawndell Winters. You guys had a heated press conference. Did he get into your skin? No, he never got into my skin you know, even though he did a little of “bad words”, which I don’t tolerate. Given all the bad things I went through in my life, I will not let nobody disrespect me like that. So he did a little. Like 5 min of savage talking. All the rest didn’t affect me, I was 100% sure of my fight plan. I was focused on my goal. Just as I showed in the fight. But he still made me angry and that’s not a good thing to do, specially when you are going to share a ring with me. A ring is not the right place to make me angry.

How did it feel to fight with no public? Do you consider it as a disadvantage or an advantage? As I said before I can fight everywhere. In the streets, in the ring, in the villages, big cities, any place you could imagine. Whether there is a big crowd or no crowd at all is the same for me. When I fight, it is for my people, for my coach, for the people who believe in me. I love the crowd but I don’t mind empty stadiums.

What were your tactics to this impressive victory? There is no tactic, this is who I am and what I do. We have strategies of course, tons of it but it don’t even show it, because it looks simple and I just destroy guys. But it is not simple, my coaches sometimes tell how and where to move but only an experienced guy can see and understand it. If you ask me, I am just there to smash it. I turn into my alter ego “The Savage” and I do the work. That’s my tactic. My Tactic is to knock out them all.

Dillian will come back stronger than ever. He did it ten times, he can do it eleven. He is like me, we have so many failures in our life that this is nothing for us

Any comments on the other fights of the evening? There were very good fights. I’m really impressed with the Chris Kongo fight. Excellent fight. Back and forward, with a strong finish from Kongo. Regarding Whyte vs Povetkin, I am sorry for my team about what happened but Dillian will come back stronger than ever. He did it ten times, he can do it eleven. He is like me, we have so many failures in our life that this is nothing for us. It can’t make us fall back. Katie Taylor also did an amazing fight. It was good, very good.

How was the impact of this victory in Croatia? The impact on my reputation as a boxer, on my Instagram account, with my Croatian people was immense. It is unreal. I have just been giving interviews all day long. I got here yesterday and already got a lot of interviews, for the major TV stations and all the rest of the press. I just love it. To be a part of it. It does get me tired but I love it and respect every single news channel. I give interviews to everybody.

Fans: look for me and tell me what fight you want to see next