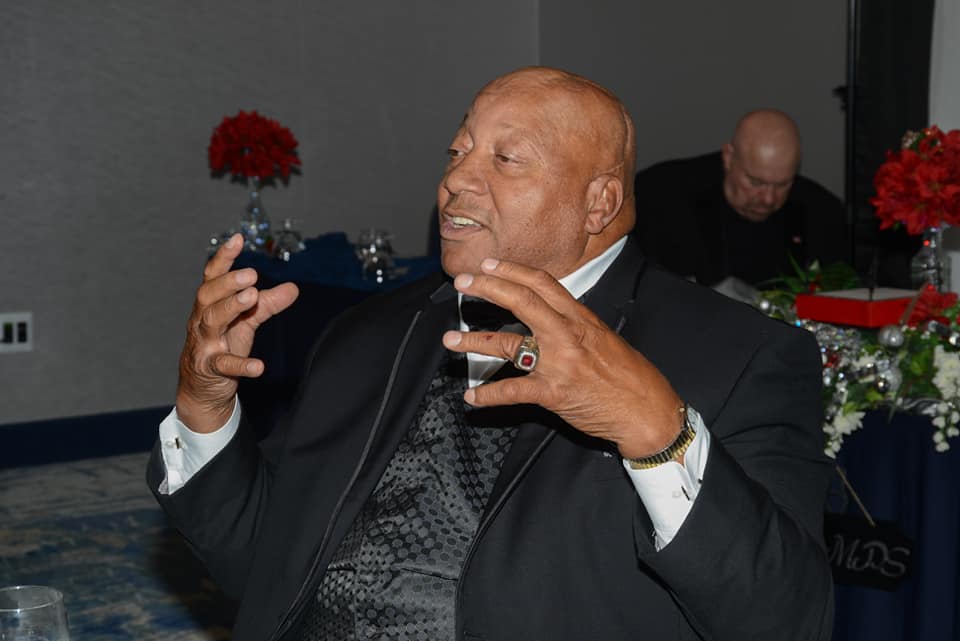 One of my favourite sports memories has always ben the unbridled joy on display from James “Bonecrusher” Smith after he knocked out then-champion Tim Witherspoon in the first round of their Dec. 12, 1986 WBA world title fight. The date was already etched in my memory because it was also my now, ex-wife’s birthday; so fight night was a big day in the Auger-Villanueva household. Smith walked around the ring after the fight, hands raised, huge smile on his face, saying to himself over and over again “James Bonecrusher Smith, heavyweight champion of the world”, like he himself couldn’t believe it.

Witherspoon had entered that fight as a huge favorite but Smith never appeared daunted in any way by the task at hand, and set to work from the opening bell; nearly knocking “Terrible Tim” out with the very first punch he landed. The referee made a small mistake in stopping the fight automatically after the third knockdown in so much as the three-knockdown rule wasn’t actually in effect for the bout. But this was truly academic as the ending would not have changed. If anything, Witherspoon was spared more punishment and saved from what might have become a very dangerous situation had the fight been allowed to continue. In the end, all’s well that ends well seemed an apropos takeaway from the bout.

Smith would only be champion for about three months. On March 7, 1987, he would face the then-indomitable Mike Tyson in Las Vegas and although he lost a unanimous decision, Smith became one of the only men to last an entire fight with Tyson in his prime. He would get only one more shot at a title, retiring after the first round against the U.K.’s Joe Bugner when a shoulder popped out. On reviewing Smith’s record though, I would put his list of opponents up against any heavyweight of any era, when it comes to the quality of the men he fought. Holmes (twice), Bruno, Witherspoon (twice), Tyson, Page, Moorer, Tubbs, Bugner, Marvis Frazier, Ribalta…the list goes on. What a resume! The man fought everybody!

I had the chance to sit down with Smith recently over a telephone interview and ask him a few questions about boxing yesterday and today, and what he’s been up to lately. I hadn’t seen any recent pictures of James but, in preparation for the bout, I looked up a few. Safe to say that this man has aged well. He’s huge, but in a good way. He has the tell-tale shoulders of the power-athlete. It’s clear that even at 67- years-old, Smith isn’t someone you’d want to mess around with. Fortunately, his somewhat brooding presence is all but eliminated when he smiles. It’s a dazzling smile of a gentle giant.

Honestly man, I just wanted to be rich and famous. I was a good athlete – and strong, so boxing was a natural fit.

David: James, how did you get involved in boxing in the first place?

James: Honestly man, I just wanted to be rich and famous. I was a good athlete – and strong, so boxing was a natural fit.

David: You certainly didn’t duck anybody. You fought US Olympian James Broad in your very first professional bout, then followed that up with the exceedingly competent Ricky Parkey. You fought Frank Bruno, Larry Holmes, Tony Tubbs, Jose Ribalta, Tim Witherspoon, Marvis Frazier, and Mike Weaver in a row! What’s even more remarkable is that you only had 14 fights under your belt when you started this streak. That was literally the “who’s who” of the 80’s heavyweights. I don’t recall any other heavyweight having that many quality opponents in a row. Do you think you were brought long too fast? Why were you fighting for your life in every bout?

Had my first pro bout at 28-years-old. But I had talent, so I was beating a lot of these guys.

James: I didn’t have a lot of choice. I was a late starter. Had my first pro bout at 28-years-old. But I had talent, so I was beating a lot of these guys. It was just a natural progression. I learned quick. It actually helped me overall. I think if Gerry Cooney had had some tougher fights before taking on Holmes, he might have beat him. But he had too many easy fights and wasn’t ready for what Larry brought to the table.

I don’t really think it’s fair to compare different decades because the game changes over the years.

David: So what are your thoughts about the division today as opposed to your time, or even others?

James: I don’t really think it’s fair to compare different decades because the game changes over the years. Today’s guys are the best of the current crop. That’s all you can ask of them. Of course, there are some champions from yesterday who nobody can mess with.

David: Alright then, along that vein, give me your three greatest heavyweight champions of all-time?

I think I’d have done okay.

David: How would James Smith have fared today?

James: Well, honestly, I believe that if I can land my right hand against any man’s head, I got a chance. I think I’d have done okay.

David: Who Is James Smith today? Is he still the “Bonecrusher”?

James: (stifles a little laugh) Actually, I’m an evangelist now. I’m teaming up with Earnie Shavers and Michael Spinks and we are doing a Boxing Legends Hall of Fame Mobile Museum coach tour.

James: Me, Earnie and Michael have teamed up to try to make a positive difference in the lives of our at-risk youth. There’s plenty of kids out there who need a little guidance. (I’m reminded at this point that Smith was a prison guard in the military, so he has a unique insight into troubled young men and women) What we’re doing is trying to raise enough money to buy a touring coach so we can travel the country, and even internationally, to help kids having problems. For $100, a donor will receive recognition as being a “Founder”, will get a certificate, a color photo of me fighting Mike Tyson, and their name on the wall of the Mobile Museum. Better yet, the donor will have the satisfaction of knowing they’ve done something really worthwhile.

David: That’s an amazing idea. Here’s my $100 right away. How can our readers help?

James: They can go to my website at www.championforkids.org and donate there

David: I have a GoFundMe we can use as well. Folks, you can go to GoFundMe and search “Boxers In Need” to donate. It’s the one with the picture of a boxer on it – the man, not the dog, lol.

David: At the start of the interview, I asked you why you started boxing. You told me that you wanted to become rich and famous. Did you succeed?

James: Well, I’m certainly famous but I’d rather describe myself as comfortable than rich. I came along just when the money was getting really big for us. I just missed out on the huge paydays. I’ve got no complaints though. I’m a happy man.

With that, our time comes to an end. We say our goodbyes and I hang up the phone. My impression of James “Bonecrusher” Smith is overwhelmingly positive. He is always trying to help. I think he might just be exactly what a true evangelist is all about; decent, kind, caring. James Smith is going to continue to be a positive force in the lives of many for years to come.