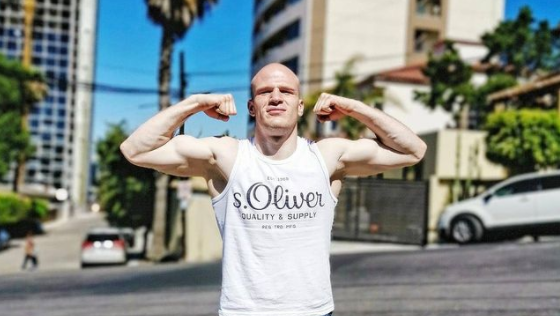 Hallo! Silver medalist European Championship U22; 4x Austrian Champion; 3x Bronze medalist European Championship; the 23-year old boxing talent Alelksandar comes from Vienna, Austria and he is the first Austrian boxer to be present in the WSB (World Series of Boxing). When not training, he likes to eat pizza, go on vacations to Banja Luka or relax at the beach with friends. Still young but with the full support of his parents, he is planing to crash the heavyweight division “party”.

Hi Aleksandar! Where are you at the moment? Hi, I am currently in Dillian Whyte’s Camp in Portugal. Preparing for the Povetkin fight.

How did boxing enter your life?– I got mobbed in school and beaten up twice on the street, I was staying at home and didn’t want to go out anymore. Then I saw the Mike Tyson Videos. I watched it every day and said I want to be like him. That’s how I decided to start boxing.

Definitely Mike Tyson influenced most boxers nowadays. We know his secret to be in shape, but what’s yours? I don’t have a secret, just hard work. You also have to tell yourself everyday how strong you are and that you can make it. NOBODY is going to stop you!

Agree… How was the first time you entered a competition and what did you learn from it? My first fight was at 16 years old, and after 6 month I started boxing. I just ran through my opponents and hit them with everything I got. 1 year after I started boxing, I already had a European Championship medal at the juniors. The more I fought, the more I learned and that’s how I created my own boxing style.

Impressive Aleksandar! Favorite Boxer? Definitely Mike Tyson who motivated me to start boxing and Tommy Morrison, I am very similar to him and I loved his power.

Tyson was aggressive inside and outside the ring. What about trash talk? Do you think it is important for the mind games and actually impacts your opponent before the fight or is it just for the fans and the build up of contest? No, I don’t like trash talk, but I always say that I’m going to make it and become World Champion. I am convincing myself and I know I have everything that a champion needs to become a champion. In amateur boxing you don’t trash talk like in pro boxing. I don’t know how I’m going to be as a pro but I know you can x#?!.. the mind from your opponent with the right words.

Tell us about Austria. There’s not much to say, it’s a beautiful country where I was born. I Love Austria.

Austria. How is evolving over there? What’s the message you will leave for young Austrian prospects that want to become pro? In Austria people don’t believe you can become a great boxer and World Champion. I’m going to prove them all wrong. No matter where you’re from, you can become a champion with the dedication and the will. I will prove them its possible. I am the Austrian Bull and I will write history.

Plans for 2021? I want to do my pro debut soon and take part in the Olympics. Once the pro-boxing world sees me, they are going to love me.