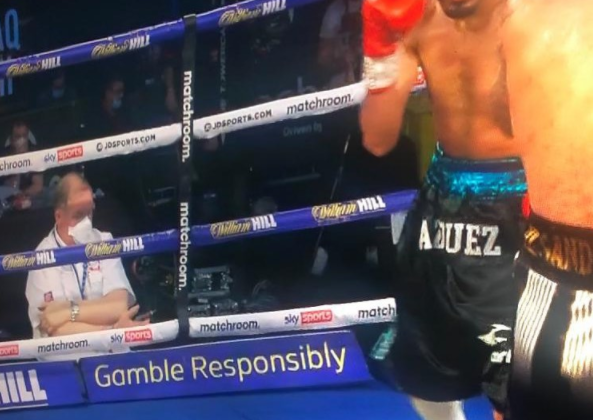 British Boxing Board of Control, what are you going to do about it? This is the question that everybody in boxing is asking themselves. Yesterday evening during the Lewis Ritson vs. Miguel Vazquez bout, a respected official and referee was caught live on cameras watching is phone when he was supposed to be scoring the match. The final score given by this referee was 117-111 in favor of Ritson though Vazquez might have won most of the rounds.

His name is Terry O’Connor and he was himself a fighter during the 70’s and early 80’s. After his fighting career he became an official referee and has almost 1500 bouts under his belt.

“Speechless!! A judge on his phone while 2 men are putting there careers and lives on the line! I hope this is dealt with accordingly! The BBBoC needs to deal with this…”, says Tony Bellew former professional boxer.

“If that’s a phone (and I presume it is) then the BBBofC should immediately remove him”, says Matchroom boxing promoter Eddie Hearn

“This image is extremely troubling to any person involved in boxing”, says WBC President Mauricio Sulaiman.

Check the fight yourself and comment if you agree with the final score cards!