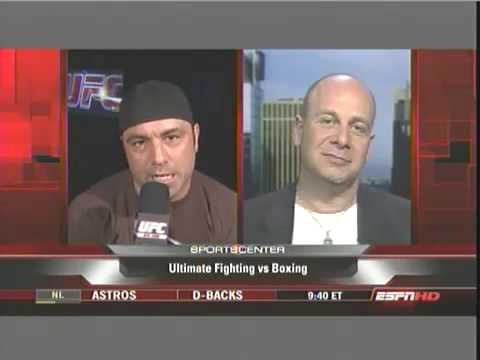 Over 12 years ago now, Joe Rogan posted a video on YouTube of his interview on ESPN with the boxing promoter Lou DiBella, the topic of the conversation being a comparison between boxing and mixed martial arts. Considering the time that has passed, let’s revisit some of the predictions made to see how they’ve held up.

The commentator opens up the interview with the most salient question for an emerging sport: Will MMA peak and fall or become a permanent part of the sports culture?

Obviously, Joe, as UFC’s most popular voice, fully believes in the sports future permanence, touting MMA as the most exciting combat sport out right now.

Lou concedes that permanence is possible, but takes a jab at the sport in his answer, claiming that as long as the MMA can continue to get “young white guys” watching the fights they’ll be fine.

Fast forward 12 years and we can clearly see MMA’s stronghold within the combat sports culture, with the UFC touting a worth of over $7 billion dollars after a deal with ESPN in 2018. As to the audience’s racial and age demographics, “young white guys” are far from the truth—Hispanic and African Americans viewers make up the majority of casual and avid fans, according to a statista poll taken in May 2020, and a news report from the Sports Business Journal in 2017 has the median age of UFC viewers at a ripe 49.

Round 1 of the interview comes to a close, with Rogan ahead by a small margin. Can DiBella close the gap in the later rounds?

Lou: “[MMA has] nothing to do with boxing . . . it’s like human cock fighting or pitbull fighting.”

Joe: “UFC is actual fighting . . . boxing is the sport of punching.”

But the boldest claim is the last point made by Joe: “The famous people that you have right now are the only famous people that will exist in the future for boxing – the Oscar de la Hoyas, the Bernard Hopkins, the Jermain Taylors, the guys that were already famous before the UFC came along – there will be no new ones. They will all go to MMA.”

While Joe may have been right in his prediction of MMA’s permanent fixture within fighting culture, he was off the mark in his claim about the famous boxers of the future. In recent years, the heavyweight class has seen a resurgence of fighters and hype with the likes of Anthony Joshua, Deontay Wilder, and Tyson Fury. Oddly enough, one of UFC’s biggest names – Francis Ngannou – has openly stated his desire to one-day move from MMA into the boxing world.

The bell rings for Round 2. DiBella has managed to score some points here, putting Rogan on the ropes and leading us into the final round.

Commentator: Can boxing respond to a sport that has cohesive marketing?

Alas, we touch on the core of boxing’s problems, spanning several years now: Who is looking out for boxing?

Lou hits at this from the get-go, making it a point to call UFC a de facto monopoly within the MMA, and alluding to the problems boxing has experienced in not having a similar unified body to represent the sport: “We screwed up our own sport, [the MMA] didn’t screw up boxing!”

In an interesting 2019 interview, DiBella reflects on the 2008 interview with Rogan and echoes the exact same sentiment, over a decade later: “The UFC is almost a monopoly . . . [with this control] you can pretty much cause a guy to fight another guy. Boxing has no ultimate authority; it has no one organization . . . [this] has worked to the detriment of the sport. There’s no one looking out for the industry as a whole.”

The fight draws to a close. But in typical boxing-decision fashion, the authority decides to make an egregious call.

Commentator: I think because [boxing] is limited to using your hands, it is more aesthetically pleasing.

Seemingly, the fight is called for boxing. But as we’ve seen in the last 12 years since this interview, the combat sports arena has changed, and so have the players in the game. The MMA continues to make a significant mark on the culture, but contrary to popular belief, boxing is still very much alive and punching.