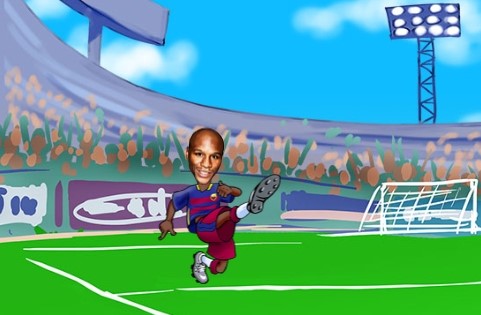 These powerhouse figures need no introduction. In the boxing world, we all know who Floyd Mayweather Jr. is, as in the football world, F.C. Barcelona is consistently cited among the greatest teams to play the game. Both Mayweather and Barça have established themselves as champions in their own right, and both receive praise from pundits internationally, but it’s where both are criticized that we can see parallels.

Let’s start with Mayweather. He is most often criticized for his hyper-defensive style of fighting, earning the name “Pretty Boy” Floyd early on in his boxing career due to the lack of scarring he had from previous fights. Mayweather’s mastery of the Philly Shell, shoulder roll defense is truly second-to-none in this era of boxing, with Mayweather’s undefeated record of 50-0 reinforcing this point. But for all its successes, Mayweather’s style has received a lot of heat, from fans and boxing experts alike.

“He’s good, yes, but he’s boring . . . I’ve fucking fallen asleep twice at his fights” – these were the words of Manny Pacquiao’s trainer Freddie Roach when asked about his thoughts on Mayweather’s style of fighting [via Fight Hype]. Roach’s sentiments are constantly echoed within the boxing community. People want to see knockouts, and Mayweather, as heavily awarded as his career has been, is not that type of fighter. Mayweather has mastered his style of boxing based on a simple premise—you can’t lose if you don’t get hit. Similarly, Barça’s style of play is based on a simple premise—you can’t score if you don’t have the ball.

i loathe all that passing for the sake of it, all that tiki-taka. it’s so much rubbish and has no purpose

Pep Guardiola; via The Telegraph

Tiki-Taka is the colloquial term for the Spanish style of football, most popularly attributed to F.C. Barcelona. This style of play is epitomized by short passes between players, a highly strategic, fast paced game of keep-away. By passing back and forth between each other in quick succession, teams that employed this tactic racked up their possession stats and eventually wore down the defense of their opponents. To perfect this style of play, Barcelona would recruit and play specialists in precision passing. The team was comprised of small, agile players with the ability to pass and move in unison, and generally there was no traditional striker or goal-scoring player—this is where a lot of criticisms stemmed from.

Football experts would complain that, while Tiki-Taka was obviously effective for keeping the ball, the few goals that would materialize after the opponent was passed to death, were not half volleys from the 18-yard line or fast break counter attacks, but casual walk-ins between duped defenders. Pep Guardiola, the Barcelona coach who brought the Tiki-Taka style of dominance to the Catalan side had his own thoughts on the possession-focused approach: “I loathe all that passing for the sake of it, all that Tiki-Taka. It’s so much rubbish and has no purpose. You have to pass the ball with a clear intention, with the aim of making it into the opposition’s goal. It’s not about passing for the sake of it.” [via The Telegraph]

Although heavily criticized at times, both Mayweather and Barça mastered their crafts within their respective styles of play. Mayweather’s opponents land only 16% of the punches they throw at him [via ESPN] and Barçelona’s average possession of 64% a game is still the highest of any European club team in the top 5 leagues [via Football Espana]. The fundamentals of boxing and football are simple in spirit: ‘don’t get hit’ and ‘keep the ball’. These strategies, when taken to a professional level, studied, and perfected have proven to be superior. But at this level of competition, showmanship is almost presumed—people want to see bloody affairs and knockouts in a fight, as they want to see individual strikers scoring wonder goals in a soccer match.

i don’t blame mayweather. he might be the smartest fighter alive

Evander Holyfield; via The Players Tribune

But can they really be blamed for not being entertaining enough? After all, they are competing within the rules created for their sports. Evander Holyfield, a world-class fighter in his own right, felt it was a problem with the system, not the fighter: “I don’t blame Mayweather. He might be the smartest fighter alive. The judges today are giving decisions to fighters who use defensive tactics, and he knows that . . . He plays the system and he wins” [via The Players Tribune].

When strategies so simple produce positive results like clockwork, perhaps the audience starts to crave that surprise they were afforded from teams or fighters with less consistency. Mayweather and Barça may not lend to the flashiest or most exciting competitions, but for those that can appreciate fundamental perfection, these behemoths of football and boxing provide a master class.