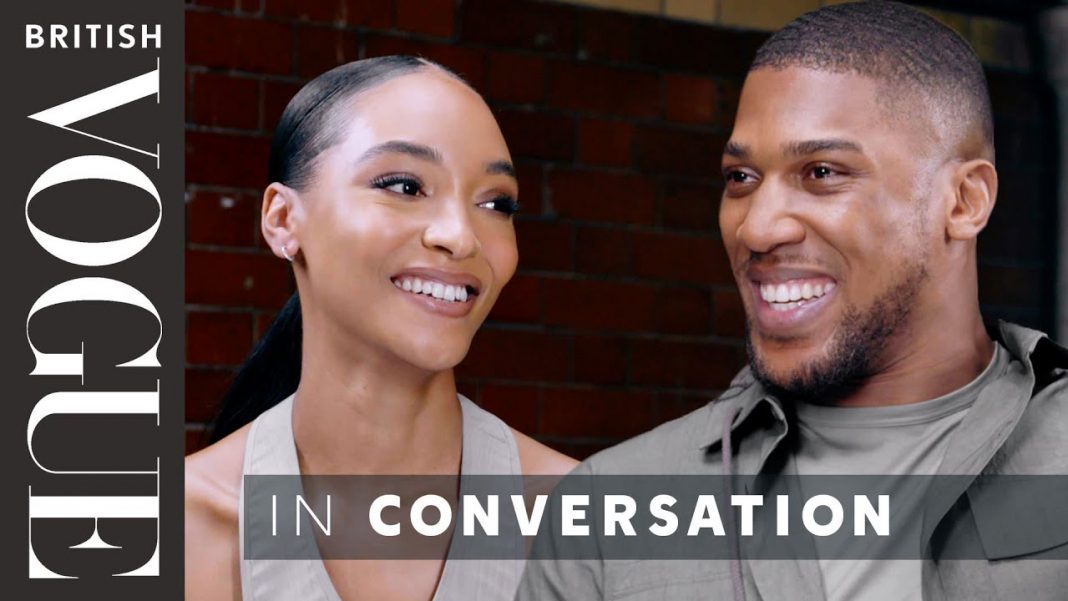 British Vogue recently released an interview with Anthony Joshua and model and actress Jourdan Dunn. Here are some highlights from the conversation.

Daily Routine
After hard training, Joshua sometimes does not leave his room until 6 in the evening–meals in bed and all. Even for a champion, it’s ok to have a lazy day, as long as you’ve put the work in. Sitting around the table for a traditional family meal isn’t a huge thing for Joshua. It’s just more about eating for fuel instead of feasting together. But the importance of dinner time is not forgotten, Joshua mentioning he does acknowledge the importance of family time.

Pre-fight Nerves
Joshua trains himself to deal with the nerves, to suppress them nerves to a certain extent. He takes himself away from London, out into the country; the distance created helps him train.

Hype Playlist
He can listen to slow jams while training. He likes jazz and old school soul music.

Adjusting to Fame
Joshua understands that he has responsibility with the platform he’s been given as a boxer. He strives to be a role model, stating “When you are well known, your name holds a little bit of weight. . . It’s a difficult position because you’re seen as perfect.”

Growing up in Watford
“Watford is running through my veins” says Joshua, reminiscing about doing estate-kid stuff, driving quads and motorbikes. He is currently helping to build youth projects in Watford, like community centers; he touches on the importance of keeping kids occupied after school.

Early Childhood in Nigeria
Joshua mentions that it was nice being exposed to so many different cultures, but school could be tough as the culture is no-nonsense. Education is very important in Nigeria–you either be a lawyer or a doctor, there’s no youtube or boxing. The Bells was the name of his boarding school in Nigeria because they woke them up with bells ringing.

Introduction to Boxing
Joshua had his own house when he was 16 or 17. He got into some trouble and was banned from Watford so he moved in with his cousin in London. He started training with his cousin and then saw Mike Tyson and learned of his story–going from a bad background to becoming one of the most praised champions the world has ever seen. He started to take boxing more seriously after this inspiration. A few years later he went to the Olympics representing Great Britain and won the gold medal.

Experience with Race in the UK
Joshua didn’t learn so much about it when he was younger; he wasn’t given that talk, and he was lucky enough to not experience so much racism to his face in his youth, but nonetheless he believes in standing up for anyone who is oppressed. He is actively trying to give back, starting community centers and dedicating days for the African and Caribbean children at those centers.

Fatherhood
Joshua hopes that his son grows to be happy and well-mannered. He also hopes his son learns about accountancy, as it’s important to learn about the numbers of a business.

The Youth
Joshua mentions that the next generation of kids will be smarter than us because they will have been on computers for much longer than we ever have, learning all about things like crypto currency, stocks and shares, artificial intelligence.

Leadership & Charity
Joshua is most proud of what he’s able to give back. “You put some people in a position of power, and they take advantage of it”, he says. He believes a position of power puts you in a position to give back and give service. He tries to keep a humble head. He wants to be a leader but also stand with the people. Outside of boxing, he’s trying to champion causes that are selfless, “that’s what I’m most proud of: seeing other people smile from my hard work.”

Mindset of a Champion
Interviewer: What goes through your head in the final moments before you walk out into the ring? “I’m here now, no turning back. . .I can tell you that it’s going to be easy, but I’m gonna keep it real, it’s gonna be tough, that’s why we’re the best in the world . . . I’m willing to walk that path and prove that there is only one–and that’s me.”