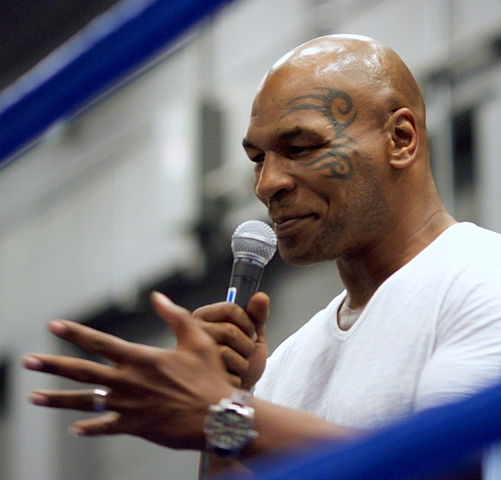 Should the ex-heavyweight champion get a second chance?

Anybody who has been in the ring will tell you the hardest punch is the one you never see coming. After just a few sparring sessions a mediocre boxer will slip the jab, roll a hook, and parry a straight cross instinctually. Outside of the ring, however, no combination of footwork and head movement can fabricate a bulwark staunch enough to defend against the tragedies everyday life throws. This invisible opponent has sent champions like Evander Holyfield into debt, Mike Tyson to prison, and Arturo Gatti and Hector Camacho to an early undignified grave. With glory so often beyond the reach of most athletes, what is it that keeps new fighters emerging from the forge?

“There’s always a fight left in a fighter,” Homer Gibbins said in our 2020 interview. Almost two decades after hanging up his gloves, the former two-time junior welterweight champion, who went the distance with Hector Camacho, put his bid in for commissioner of Pike County, Georgia. “I want to fight for my community and the city that I live in. A fighter will always have a battle fight. If they don’t, the drugs, the drinking—that lifestyle, wears down on you.”

Tragedy struck the boxing community in 2009 when former junior lightweight and super lightweight champion Arturo Gatti was found unresponsive in his hotel room, and in 2012 when three weight class champion Hector Camacho was murdered outside of a bar in his native Bayamón. Originally considered a homicide by Brazilian authorities and then ruled a suicide, the events surrounding Gatti’s death remains a mystery. What is clear are the sentiments Gibbin’s expressed about life post-boxing.. An aging fighter who might have once been a world champion will eventually find themself being among normal people who have never tasted the victory of conquest. It can be frightening—even more so to some than stepping back in the ring. What distinguishes a warrior from everyone else is their ability to accept conflict as a part of life and embraces the struggle. It takes an utterly unique individual with an indomitable constitution to stand toe to toe with an equally ferocious opponent—never mind emerge victorious! A few names come to mind. These are humans who were tempered in battle at a young age and never broke during war. It seemed like nothing could stop them, but one thing did—peacetime.

No former pugilist got hit harder between fights, and during retirement, than Iron Mike Tyson. His defeat by vice overshadowed his crushing loss to Buster Douglas in 1990 so much that its effects are still discussed by boxing writers and fans today. The founder and owner of Tyson Ranch and Tyson Holistic Holdings, Tyson overcame his drug and alcohol dependency by replacing dangerous painkillers with marijuana. Now reportedly doing $1,000,000 a month in business, the Tyson empire continues to grow just as his podcast, Hotboxing with Mike Tyson, gathers the attention of more prominent guests.

It was twenty-nine years ago that Tyson was arrested for raping Miss Black Rhode Island Desiree Washington on the night of July 19th, 1991 in room 606 of the Canterbury Hotel in Indianapolis, Indiana. The case created a media frenzy as the youngest heavyweight champion was sentenced to six years in prison in what Donald Trump called a “railroad job” during a 1992 interview with NBC.

Donald Trump is not the only high-profile figure to question the events that occurred in room 606 on July 19th. “I’m a big fan of Mike Tyson,” Gleason’s Gym owner Bruce Silverglade said in a 2020 interview with friend Gregory Vita. “He’s one of the few champions that gave back to the gym. As far as his case is concerned, I wasn’t there, but I don’t know if I believe all the facts that came out in the case and the way it went down.”

In that same interview with Bruce Silverglade, the conversation turned its attention to Greg, who had previously trained at Gleason’s under head trainer Hector Roca. An amateur welterweight, Hector was looking for comparable sparring partners and chose Greg to spar with New York Metro Golden Glove finalist he had been training. Before he knew it, Greg was lying on his back staring into the florescent lights above.

“Oh great,” Greg recalled. “Here am I trying to make this my career and fifty people just watched me get knocked down in the first round. I was angry and embarrassed, but I just planted my hands onto the mat and began to get up.” As he did, a mysterious force drove him forward, sending him darting across the ring.

Over the next few years Greg racked up an impressive record with over forty fights and got so far as asking Teddy Atlas to train him. Unfortunately, tragedy would strike on February 16th, 1990 when Greg was arrested for drug possession with intent to sell. It was an accusation both Bruce and Hector considered to be outside of his character and they were even more shocked when they found out who set him up.

In began in the late 1980’s. Greg had moved out of his mother Laura’s house after her and his stepfather divorced and about a year later, in 1990, returned one day to retrieve some clothing. He was very leery of his mother because at one time she told the police he threatened to kill her, which was an accusation none of the police officers believed. To be safe, Greg told his aunt Mary that he was just going to grab some of his belongings in case his mother wanted to start something. As he entered the kitchen a squad of Nassau County police officers tackled him to the ground and beat him. They knocked teeth out and left large dark bruises over his entire body. A uniformed cop sat Greg up after it was all over and Greg asked him what they were charging him with.

What the officer was talking about was a small packet of cocaine detectives found in the cushion of the couch in the basement, along with a pocketknife and a bundle of a cash totaling $606. To Greg, five hundred milligrams sounded like a lot. Even so, the weight of the tiny packet was eye balled and on a speculative basis. Nothing was brought to a lab or measured in front of him. Five hundred milligrams was, coincidentally enough, a felony. Four hundred and ninety-nine milligrams and it would have only been a misdemeanor.

Outside, the whole block was lit up in blue and red. It was like a scene from Miami Vice. Greg knew right away his mother was behind this. It was the beginning of the end. For anyone who has not dealt with family betrayal, Greg will tell you that it feels like having your heart torn from your chest with a red-hot fire poker. He immediately called his aunt Mary from jail only to hear her say she had no idea what happened and hang up the phone. The judge set his bail at $30,000. He was scared, destitute, and hopeless. After two weeks in jail, the door to his cell opened. He was free. Initially, he thought his aunt had bailed him out, but the name Christina Franzese appeared on the bail receipt, along with notes detailing his $30,000 price tag was a secured bond. Christina Franzese, or Tina as she was commonly referred to, was the wife of long-time Colombo Crime Family underboss John “Sonny” Franzese. At first, he could not believe it, but Tina explained that her daughter Gia—who was a close friend of Greg’s—insisted they bail him out. Hastily he changed out of the orange jumpsuit and retrieved his belongings from the storage locker.

Over the past thirty years the truth behind Greg’s arrest has slowly been coming out. Thanks to the efforts of defense attorney Kenneth J. Aronson, Greg was given the opportunity to reopen his case in front of a new judge, only to have the judge turn it down. Unsealed documents from the Nassau County Clerk’s office showed that Robert G. Peck—one attorney representing Greg—had accepted a check from his mother, who was a testifying witness against him. Mr. Aronson admitted that an ethics violation occurred when Peck accepted the check.

As fate would have it, many coincidences with Greg’s case and Tyson’s exposed a similar pattern of deceptive judicial practices small towns use to convict innocent people. Considered another railroad job in its own right by Homer Gibbin’s, Greg’s case parallels Tyson’s in many ways. Barbara Trathen—the co-prosecutor working Tyson’s trial—claimed he was a wolf in sheep’s clothing and labeled him a monster. Greg actually had a witness named Barbara who agreed to testify on his behalf that he wasn’t dealing drugs, only to have the judge pass. That judge, however, kept Greg‘s mother on the stand as she referred to him as a monster too. Greg’s half-brother, who also testified against him, was named Michael and the head prosecutor in Tyson’s case was named Gregory (Garrison). The rape was alleged to have occurred in room 606 of the Canterbury Hotel and exactly $606 in cash was seized from the basement of Greg’s childhood home during the night of his arrest. Both Tyson and Greg had their bails set at $30,000 and had their boxing careers practically destroyed. Even Greg’s half-brother’s birthday falls on the same day Tyson was sentenced, March 26th.

As Tyson is slated to fight an exhibition match against Roy Jones Jr. on September 12th, speculation surrounding his case has grown, with Mr. Franzese, who remained Greg’s friend until his passing, stating he was a fan of Tyson’s. The similarities between his case and Greg‘s may be more than just mere coincidences and might deserve to be re-examined by less bias eyes.