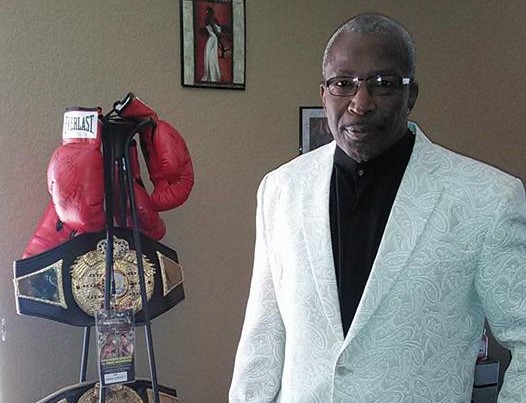 In any conversation about boxing upsets and/or fantastic finishes, the last minute, 15th Rd stoppage of Big John Tate by challenger Mike Weaver, has to be near the top. For on that first day of Spring, 1980, at the Stokely Athletic Centre in Knoxville TN, Mike “Hercules” Weaver, trailing badly on every scorecard,  forever etched his name in boxing lore when he knocked out the defending WBA Heavyweight Champion, Marion, Arkansas’ “Big” John Tate.

Weaver would successfully defend that title twice – against the competent South African, Gerrie Coetzee and the excellent American, James “Quick” Tillis before being stopped by Michael Dokes in his third defence. Weaver carried on his career for another 19 years, losing to some big names but beating some as well. He had wins over Carl Williams, David Jaco, and Bert Cooper, but he was never able to catch lightning in a bottle again. Weaver retired for good in 2000. I sat down with him recently to discuss his career and what he’s been doing since retiring.

Covid-19 restrictions forced us to do the interview by Skype, but even over the internet, it’s easy to see how Weaver got the nickname, Hercules. The man is huge. Physical power just emanates off of him. His neck is thick. His forearms are enormous. Weaver’s hands look like a couple of hams. It’s not hard to see where his power came from, but it is hard to understand why anyone in their right mind would fight this man. Countering his near ominous physical appearance, Weaver has a disarming smile and is clearly a people person and a very nice man. He has “sense of humour” writ large all over him.

Mike stirs his coffee, sits back in his chair, and we begin.

Me: Mike, thanks for taking the time to sit down with me. You have a lot of fans still because I’ve heard from many leading up to this interview, who want me to ask you a variety of questions. Let me get these ones out of the way first. There’s no way to talk with Mike Weaver and not ask about the Tate fight. Would you like to share some of your memories of that night with us?

Mike: I remember every detail about that night. I was a big underdog but I felt I could win. He was just slightly better than me every round. But I kept trying, kept punching. I knew he was feeling my shots. I just had to land a big one.

Me: Did you know or even believe, that you were way behind on the scorecards entering the 15th round?

Mike: Oh I knew I was behind all right. My manager, my whole corner, my fans – everybody pulling for me let me know I was behind and I had to knock him out. So I did. (Mike says this in such a matter of fact way, I can’t help but smile.)

Me: You had 59 other fights in your storied career. Which one, or ones, do you wish fans and media guys like me would ask you about?

Mike: No, not really. I get why everybody asks me about the Tate fight. I have no problem with that.

Me: After Joey Curtis stopped your fight against Michael Dokes in the first round at Caesars Palace in 1981, you claimed the fight had been fixed. I remember that fight. Stoppage certainly seemed premature but do you still believe the fix was in, or on reflection, do you think Curtis just made a mistake?

Mike:  Man, that fight was fixed. I believe it to this day. I remember one of my guys telling me before the fight to be careful because he had heard they were looking to stop it early. There was a rumour that an official involved in the fight had bet on it being stopped in Rd. 1. I was a slow starter and he caught me cold. But look at the tape. I’m not hurt. I still can’t believe the ref stopped it – at least, I couldn’t believe it until I heard the fix was in. Then it all made sense.

Me: Best boxer you ever faced?

Me: I ask everyone this because the answers are so varied and interesting. How did you get involved in boxing in the first place?

Mike: Kind of by accident. I went to see a fight on a base in North Carolina. When I got there, some guy pushed me. I pushed him back. We got into a tussle and I knocked him out. Turned out he was a boxer. Couple people saw what happened and told me I should box. That’s a short version of how I got started.

Me: You turned Pro in 1972, lost 3 of your first 4 bouts and were only 6-6 after 12. So I have two questions: a), were you discouraged by your slow start and b), when did things start to turn around; when did you start to say to yourself, “Hey, I’m pretty good. Maybe I can do something here?”

Mike: I didn’t have no real training or anything when I started. I was just a big strong guy out of the service. I just needed to make a few bucks so I said “yes” to pretty much any fight. Then in 1976, I beat Jody Ballard. He was pretty highly thought of at the time. It was a big win for me. I lost a couple close decisions after that but a few people had started to take notice of me. I got a new team in 1978 headed up by Don Manuel. That’s really when everything started to change for me.

Me: Did you ever think about a comeback? It’s all the rage now.

Me: What do you think of the Heavyweight division these days?

Mike: I mean, it’s okay. I like Wilder. But I wouldn’t say the division is great.

Me: Give me your top-5 heavyweight champions of all time?

Mike: I only rate 4 because they are so much better than everyone else. Ali, Louis, Marciano, and Holmes.

Me: What have you done since retiring from the ring? What are you up to these days?

Mike: Happy to say I’m doing nothing. (He laughs here). I’m 69-years-old and enjoying my retirement. Still work out two or three days a week. Like spending time with my family and friends and old boxers.

Me: I know you play the piano a little. How did that come about? Do you still play?

Mike: (laughing)…Yeah man. How’d you know about that? I still play. Been at it hard for three years or so now. Messed around with it a bit when I was a kid but more serious about it now.

Me: Any message for your fans before we close?

Mike: I just want to say that I feel blessed to have them. I want them to know I’m doing ok. My health is good and I’m happy. I also want to wish them blessings and ask everyone to stay safe.