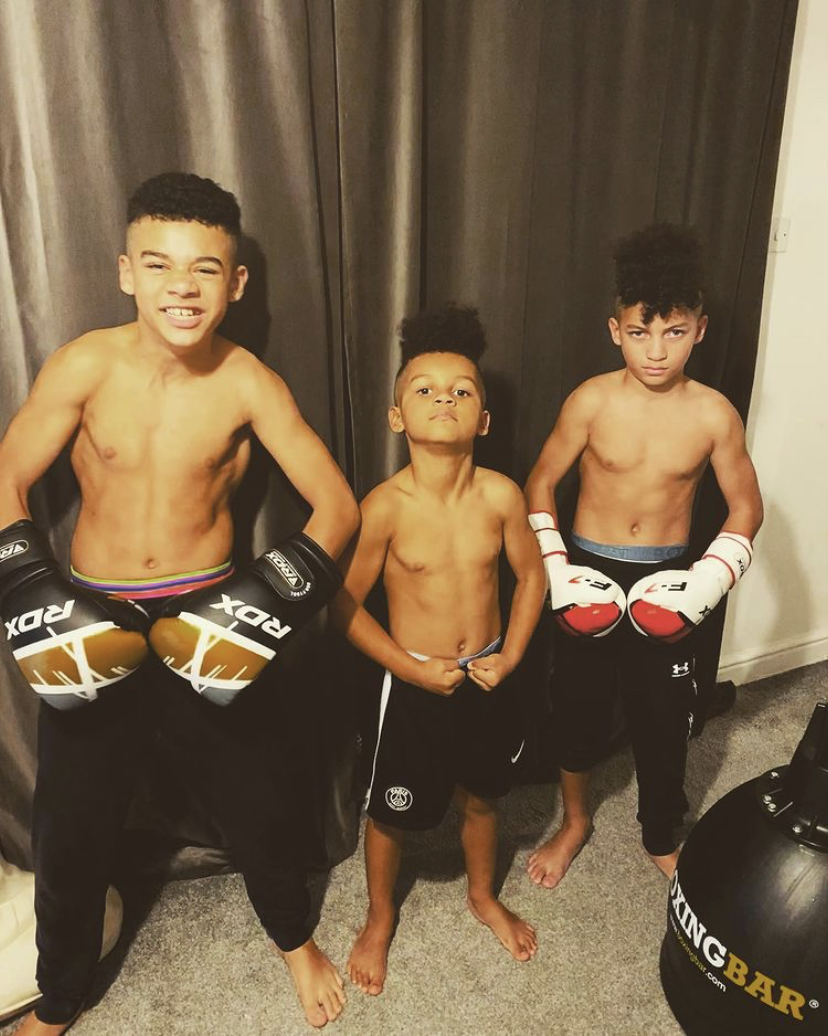 The best boxers discover the sport at a young age. They fall in love with the sport. They become obsessed. Eat, train, sleep, repeat. But what does life look like for the parents? How do they feel about their children entering the brutal and dangerous world of combat sports? Jab-to-Jab spoke to Sabrina, a UK-based mother to three boxing mad boys sporting boys to find out what life looks like from that side of the ring.

My name is Sabrina. I’m a full-time mum, to three sporty boys Olivier (9), Valentino (7) and Emilio (6). I was also very sporty when I was younger: I used to play basketball for England when I was a teenager.

We live in Hertfordshire…

The boys have been interested in boxing from a young age, but have really focused and been pushing themselves for the last two-and-a-half years. Of course, I’m concerned about what might happen if they fight professionally, but it’s something they want to do, so I will always support them no matter what.

The boys are rarely injured at the moment, but I’m sure it is something I will need to manage more as they get older.

Before boxing, it was challenging to discipline the boys as there wasn’t anything that they cared about losing. Now, if they don’t behave I can resort to reducing the amount of training they are allowed to do, or taking some of their equipment away and that always gets them thinking! School comes first so they have to get their work done before they are allowed to train. Their effort and behaviour has really improved, with the boys consistently winning prizes for effort and achievement in their academic studies. The boys know that it is not just enough to be a boss in the ring, they must be bosses in the classroom too!

The boys help around the house and all have jobs to do, anything from hoovering, making beds, washing up and cleaning the bathroom. And in the summer months, they cut the grass and pull out any weeds in the garden. These are standard things in our home.

Since the boys have begun to box, their confidence has really improved. They get on really well with the other children at school and have nice friendship groups. The boys are very close to their cousins also.

They train almost everyday! I would say that they train at least five days a week, with sessions being from anything from an hour, up to four hours! I have to try and get them to rest on some days, as they would be at it all day and night if they could! I got Valentino a boxing bar recently for his birthday and the boys are now setting their alarms for 6am so they can do their normal workout and now add this into their routine before home school!

They all sleep well, actually Emilio is in bed for 6:30-7pm, Tino around 8pm at the latest and Olivier around 9pm. However, during lockdown, it has become later some nights for Olivier.

The boys eat a LOT! Four meals a day, plus snacks! The boys eat a very healthy, balanced diet, Olivier is a vegetarian and the other two eat meat about once or twice a month. They eat lots of fruits, lentils, fish, veg, carbs, it’s just non-stop eating really! They have been in the kitchen cooking with me for a while now and both older boys can cook a handful of meals by themselves, which I think is extremely important for them to learn as a life skill. The boys all love to demolish chocolate, it’s their favourite treat!

The boys absolutely love training with Dillian and David. David has boys of similar ages, so it is great to get them together (when not in lockdown!) and pushing each other on. Being trained by such a legend as David has given the boys even more determination and belief that they too can be champions one day.

Right now, the boys are just focused on training to be the best they can. Both Olivier and Valentino want to be world champions. Their motivation and energy is infectious and they make me want to get up and train too! They’ve got good role models around them who are all supporting them in their dreams, while I am also making sure that they remain and grow into decent young men.

The main thing is the boys are happy and healthy. I tell them everyday to work hard at whatever you are doing, and then that way whatever the outcome is, it doesn’t matter as they have tried their best. Mental health comes first.

For any parents out there that are wanting to get their children into boxing, I would tell them not to push them, but let them come to it themselves. Unless the children want to get up at 6am and go out in the cold and wet and train for hours, nothing you do will make them. Give them experiences and support them in whatever it is that they want to do, whether it be boxing or not, that way they will be truly motivated.