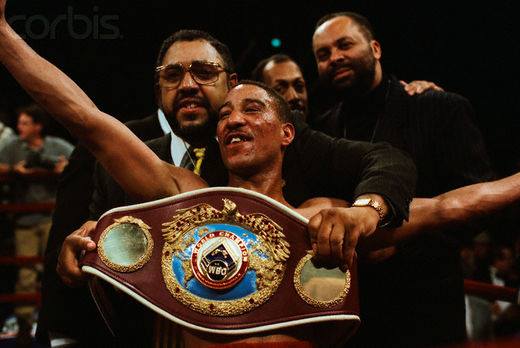 Few signs are a better arbiter of a boxer’s pedigree and prospects than an Olympic gold medal. The sport is filled with world champions who have this prestigious accomplishment on their resume; Joe Frazier, Oscar De La Hoya, Riddick Bowe, Lennox Lewis; the list goes on. Surprisingly though, not all Olympic gold medalists or even world champions for that matter, go on to achieve lasting fame. For some, when the venue lights fade, they seem to quietly blend in with the shadows and vanish from public view.

Mississippi’s Kennedy McKinney is one such fighter. An Olympic gold medal in the 1988 Games, was the precursor to the IBF and WBO world bantamweight championships. Any fight fan would think that with wins over the likes of Welcome Ncita, “Sugar Baby” Rojas, and the incomparable Junior Jones, McKinney would be a name bandied about upon his retirement with others such as Naseem Hamed or Marco Antonio Barrera. But this wasn’t to be.

The reasons are at times, obvious and at times, nuanced. McKinney was known in some circles as a “safety first” fighter. He was described by many as a boxing anomaly; cautious, yet exciting. The great Emanuel Steward said of McKinney, “I’ll never understand why a fighter with Kennedy’s crazy offensive skills, sometimes fights “not to lose.” This unevenness in McKinney’s approach in the ring made him hard to warm up to for boxing fans. They never knew if they were going to get a spectacular fight with a sensational finish like his battles with Ncita and Barrera, or a wholly unsatisfying effort like his bout with Mexico’s Nestor Lopez in 1996.

He wasn’t exactly fighting in a glamour division either. Bantamweights are not renowned for capturing the public’s imagination unless they have an outrageous personality like the U. K.’s Naseem Hamed, or a foil, like Marco Antonio Barrera and Erik Morales were for each other. Consider this; the record purse for a bantamweight fight is only $725,000 for the Nonito Donaire/Omar Narvaez fight in 2011. It’s not a division that’s ever going to yield an eight-figure payday. The lack of knockouts in the lighter divisions means their appeal is limited more to boxing purists than the casual fan – and casual fans make up the vast, vast majority of PPV buys.

Adding to this, McKinney was somewhat erratic in his life outside the squared circle. His drug problems were legendary, affecting his personal life, his training, his health, and, not surprisingly, his results. After his retirement, McKinney lamented in an interview with The Ring magazine, “That’s one thing I wish I hadn’t done. I was messed up for a long time. That’s the only thing about my career. I wish I hadn’t taken drugs.” What Kennedy would come to learn the hard way is that fans have a hard time caring about fighters who don’t seem to care about themselves; and by extension, the sport and the fans. Regardless of his skills, McKinney was just not able to capture the public’s imagination.

This was somewhat unfair. Plenty of boxers have had untold difficulties in and out of the ring, yet have captured the adulation of the public. Mike Tyson comes to mind, but also throw in the late greats, Johnny Tapia, and Sonny Liston, as well as fighters like Bernard Hopkins among many, many others. More fighters than we can count have had problems with drug addiction yet have had a massive fan base.

As for his fighting style, many of Kennedy’s fans who witnessed his fights, must wonder what so many had missed about this wonderful boxer. His battle with Barrera was epic. Knocked down five times over the first 10 rounds, he was on the verge of being stopped when he caught Marco Antonio in the 11th stanza, almost knocking him out. Barrera did recover to stop McKinney in the next round but he had made a real impression with his gameness. Similarly, he was on the verge of losing to Welcome Ncita in their first bout when he caught him with a perfect right hand in the 12th and final round, knocking him cold. His victory over Junior Jones was as spectacular as it was unexpected. Have no doubt about it, Kennedy McKinney could fight!

So what was it? What stood between McKinney and lasting fame? I think the answer lies somewhere else; bad timing. McKinney came along during the ‘Golden Boys’ era of boxing. Already hampered by being in the bantamweight division, McKinney was vying for exposure at the same time as Oscar De La Hoya, Roy Jones Jr., Evander Holyfield, “Sugar” Shane Mosley, and Floyd Mayweather Jr. I’m leaving out Felix Trinidad and Bernard Hopkins! McKinney was up against a Hall of Fame type world champion in virtually every division.

Compounding this, McKinney had left Bob Arum’s stable and found himself with no major promoter to help keep him in the limelight with marquee matchups. The fact that he never had a shot at Naseem Hamed serves only to underline this point. There was only so much money to go around, only so many PPV events. Without a truly major backer, Kennedy became a bantamweight version of perennial heavyweight contender and two-time champion, Tim Witherspoon; always on the outside looking in.

Despite this, McKinney regrets just two things about his career; his drug use and the brevity of his reign as the Bantamweight Champion of the World. Fortunately, this is one “poor boxer” story that avoided a tragic ending. On his retirement, McKinney sought out the help he needed to slay his demons and has been clean for the better part of 20 years now. McKinney is financially secure. He remarried and moved back to his home state of Mississippi where he spends as much time as he can with his wife and two sons. He is also the revered head coach at the Prize Fight Gym in Southaven, Mississippi, where he’s simply known as “Coach McKinney.” All in all, Kennedy McKinney’s path may have been bumpy, but it has at least culminated in a life now well-lived. Kennedy McKinney; a story of redemption.